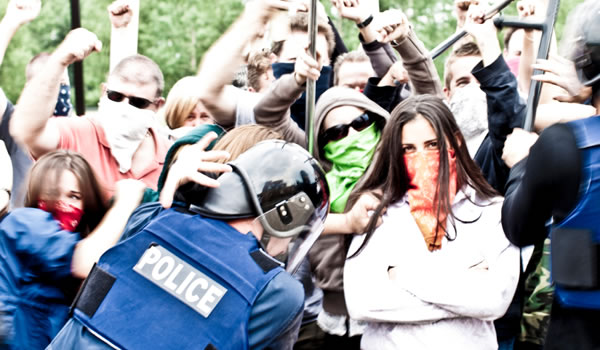 Resistance - a play by Lee MacDougall

Resistance tells the story of three young G8 protestors who, by accident, take a high-powered executive from a Pharmaceutical conglomerate hostage. Owen, Jennie and Gerry have been travelling around the globe, squatting where they can, and protesting the G8 summits wherever they happen. One morning, Jennie picks up a stranger in a suit, Mr. Sullivan, who turns out to be much more powerful, and subsequently dangerous than any of them suspects.

When Mr. Sullivan's assistant Beth arrives to help negotiate his release, the stakes increase, as secrets are revealed, loyalties are tested, and the truth changes the lives of everyone involved. Darkly humorous and political, Resistance is a story of young people learning about the world, and about themselves.

Resistance was first read in Stratford, and subsequently workshopped at Factory Theatre in Toronto. The play is in development.

Resistance has a cast of five; three men, and two women. One of the women should be of African descent.

Copies of Resistance can be ordered from Literary agent Pam Winter at Gary Goddard and Associates. pamwintergga@bellnet.ca