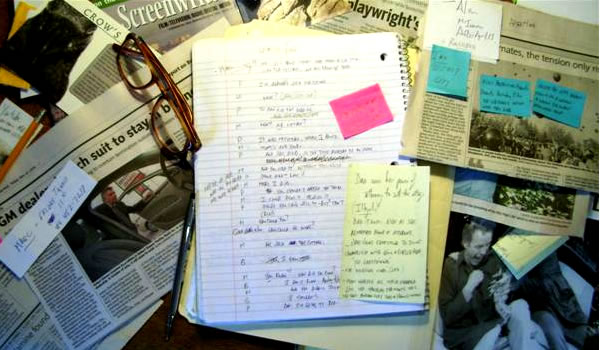 Lee’s first writing experience was a comedy review directed by Blake Heathcote entitled Don’t Worry, Mom. This review was written by the cast, and premiered at the Innis College Cabaret at the University of Toronto.

Lee’s first solo playwrighting endeavour was the play High Life. Inspired by men he was billeted with while acting in Halifax, this play was first produced by Crow ’s Theatre at the DuMaurier World Stage Festival at Harbourfront Centre, in Toronto. The next year it was remounted by Harbourfront Centre, and that production went on a cross Canada tour. There have been subsequent productions all over Canada, including a translation into French and a tour of Quebec. The play has been produced Off-Broadway by Primary Stages in NY, by Victory Gardens Theatre in Chicago, and at the Bush Theatre in London. The Japanese translation premiered at Ryuzanji Show Co. in Tokyo, and has since toured to China, and been produced in Seoul, South Korea.

Lee wrote the screenplay of the film of High Life, which was produced by Triptych Media Inc., and directedy by Gary Yates. The film premiered at the Toronto International Film Festival, and subsequently opened across Canada.

Lee was commissioned by Theatre Aquarius in Hamilton, Ontario to write a stage adaptation of W.O. Mitchell’s novel Who Has Seen the Wind. The play premiered at Theatre Aquarius, and has since been produced at Persephone Theatre in Saskatoon, Citadel Theatre in Edomonton, and Alberta Theatre Projects in Calgary.

Lee's play The Ginkgo Tree, premiered at the Arts Club Theatre in Vancouver, and a new draft of the play premiered at the Blyth Festival in Blyth, Ontario. Lee has also written a play called Resistance, which was workshopped at Factory Theatre, and had a reading at the Stratford Festival.

For radio, Lee wrote a script called Her Wonders, which was broadcast on CBC Radio One.
Lee has also written a collection of short stories called Kick Start, available on this website.

Other writing includes a series of profiles for Xtra Magazine in Toronto.
Lee continues to work on new plays and screenplays at his home in Stratford, Ontario.